The following analysis of earnings performance relates to continuing operations as of December 31, 2017. Please refer to the “Performance of the Group Divisions” section for a more detailed picture of the results of operations.

Group revenues in the financial year 2017 rose by 1.4 percent to €17.2 billion (previous year: €17.0 billion). Revenue increases were recorded in particular at RTL Group, BMG, Arvato and Bertelsmann Education Group. The Group achieved organic growth of 1.7 percent, adjusted for exchange rate and portfolio effects. The exchange rate effects were -1.0 percent and the portfolio effects were 0.7 percent. 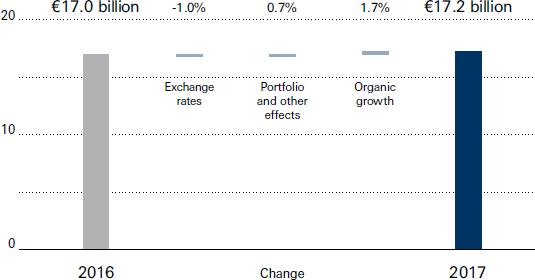 The revenue share generated by the growth businesses increased to 32 percent overall (previous year: 30 percent), thanks to organic growth and acquisitions, while the revenue share of structurally declining businesses remained stable at 4 percent (previous year: 4 percent). The growth businesses comprise those activities that post continuous revenue increases due to sustained positive market factors and that have been identified as growth priorities as part of Group strategy. These include the digital businesses of RTL Group and Gruner + Jahr; the TV production, music business and service businesses in the Arvato divisions of SCM Solutions and Financial Solutions and Systems; the education business, and the fund activities. The structurally declining businesses comprise those activities that post sustained revenue losses due to market factors. These include in particular the gravure printing activities and the storage media replication business.

Consolidated Revenues by Region
in percent

Revenues by Category
in percent